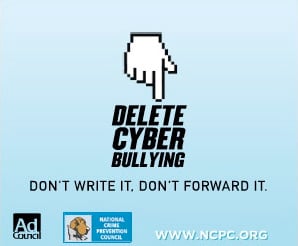 What? My child? A cyberbully? Never...

But statistics show that cyberbullied children are also likely to be cyberbullies themselves, at least some of the time. It may be in order to get revenge or completely unintentional. Kids may not even realize that some of the 10 behaviors below are actually forms of cyberbullying:

Cyberbullying is a lot more than just making a rude comment on their Facebook Wall. It encompasses all kinds of online intimidation, harassment, and humiliation.Could your child be cyberbullying someone else without knowing it?