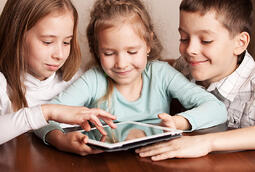 Last month Apple finally made the move to ban sexy applications from the company's popular App Store. Female customers and parents can claim a big victory here because it was their loud and justifiable chorus of complaints that led to the change.

Apple made parental controls available last summer after parents complained of their absence on early versions of the iTouch and iPhone. But many felt that the large quantities of sexually suggestive apps for sale in the App Store was a problem as well. The recently banned applications included women in suggestive adult poses and/or barely dressed women. An estimated 5% of the 140,000 applications in the App Store were affected by the new decency standards. Noteworthy exemptions from the new policy are Playboy and Sports Illustrated's Swim Suit application.

END_OF_DOCUMENT_TOKEN_TO_BE_REPLACED
All posts
We are pleased to announce that Bark will be taking over where we leave off. The uKnowKids mission to protect digital kids will live on with Bark. Our team will be working closely with Bark’s team in the future, so that we can continue making the digital world a safer, better place for kids and their families. While we are disappointed we could not complete this mission independently, we are also pleased to hand the uKnowKids baton to Bark.