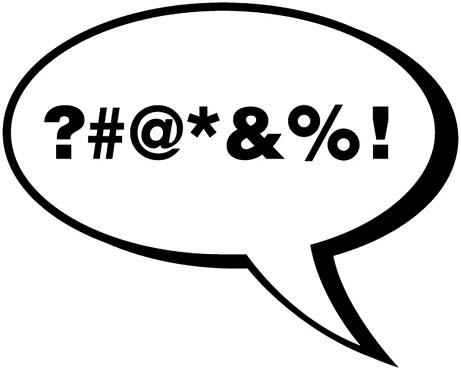 An MTV poll shows that kids are both more likely to use vulgarity and slurs online and less likely to be offended when someone else does it. The online survey asked 1,355 people ages 14-24 about the language they and others use when texting or social networking, and found some surprising results. Much of this language is closely associated with cyberbullying, sexting, and other hot teenage issues.

Slurs targeting women, racial minorities, and homosexuals are becoming commonplace online. Kids also admit that they are becoming blasé about reading words like “slut,” “fag,” “retard,” and even the N-word in cyberspace.

And though it's fairly common to hear teens saying “that's so gay” or “what's up, @^$%#!” in the hallways at school, something about the anonymity of texting or posting bumps up the use of potentially offensive language: 71% of people polled say the are more likely to use slurs online than in person

So why do kids use slurs? Over half of respondents said that people use vulgar slurs online because they're “trying to be funny.” About half also say that it's okay to talk that way among friends because they know it's “just joking” or “they don't really mean it.” Only 1/3 say that slurs against African-Americans are actually heartfelt, and a full 75% agree that slurs against women are meant to be funny.

This new poll dredges up a vivid memory of mine, even though it comes from a time before texting or social networking. As I talked with friends in a high school biology lab before class started, I said “That's retarded.” A girl named Tina turned around and pleaded with me not to use that word. She told me how deeply offensive it was to her, and that her mentally handicapped brother was the best person she knew. I felt deeply ashamed, and to this day decades later I not only avoid ever describing anything as “retarded,” I also get uncomfortable whenever I hear anyone else doing it.

Maybe a large percentage of the kids polled in the MTV survey think that being vulgar online is funny and no big deal, but to some people it is. And the only way that offensive language will disappear from the screen is if your kids don't do it themselves and tell others to knock it off when they see it.