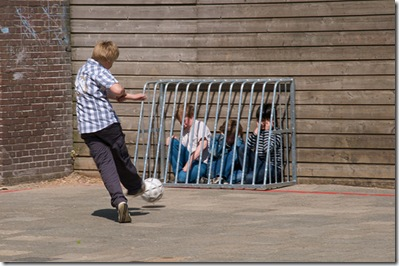 Legislators often demand that schools take more responsibility for students who engage in cyberbullying, sexting, or posting fight videos on the Internet – even when it doesn't happen in school or during school hours. One major question many parents are asking themselves is: can a school possibly police their students' online lives? And even if they can, should they?

Actually, the U.S. Supreme Court has ruled that schools can discipline their students for activities that occur on their own time away from campus, as long as the activities are “disruptive” or “dangerous” to the school or student body. So if a student's online conduct poses a threat to the school or other students (a subjective judgement), they can be punished.

What about the first question? Do schools even have the capability to monitor their student's digital citizenship? Teachers and school administrators are often overworked and overburdened as it is, unable to find the time (or the money) to comb the Internet to keep tabs on their students. How is any single entity expected to keep an eye on something as vast as the Internet, in addition to its regular 9-to-5 job of educating our children?

Australian independent schools have recently made headlines by using an online intelligence company to help them monitor their students' public posts on Facebook, admitting that they can't keep up with it all on their own. Some view the activity as a waste of taxpayer money, while others are outraged at the perceived invasion of privacy.

Opinions on these questions range all across the board, but what is certain is that schools cannot replace responsible parenting. Digital citizenship classes, school cyberbullying policies, and sexting legislation will never have the same impact that a one-on-one parent-child conversation does. Schools should play a supporting role, not a leading one, in monitoring and combating dangerous online behavior. Besides, even if schools really could effectively do it, wouldn't you really rather be a part of your teen's digital world?