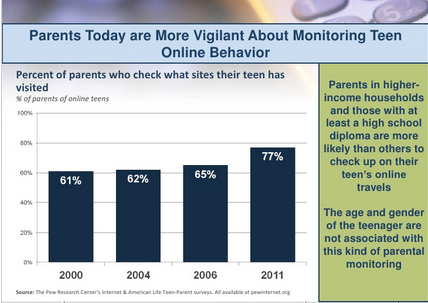 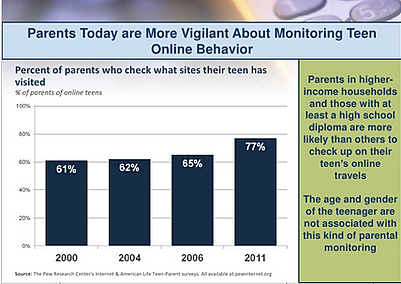 Most teenagers use social-media sites and parents are wise to it, "friending" their kids and monitoring which sites they visit at an increased rate, according to a study presented at an educators conference today.

Seventy-six percent of teens are on social-media sites, with most -- 93 percent -- of them on Facebook, according to the Pew Internet study that examined the behavior of teens online.

And the usage increases with age -- a sign that parents are sticking tight to a rule that only teens 13-years-old and up can go on social-media sites, something such sites have been dinged for failing to police in the past.

The report said 45 percent of online 12-year-olds use social-network sites and that the number doubles to 82 percent for 13-year-old internet users.

The increased Internet usage may be why parents are increasing their vigilance online.

The percentage of parents monitoring which sites their teens have visited has increased by 16 percent within 11 years.

Sixty percent of parents checked out the sites in 2000 and 77 percent were checking in 2011. The percentage grew gradually over the years before jumping from 65 percent in 2006 to the 77 percent of 2011.

But there's an Internet function teens don't use: e-mail.

The study shows that teens turn to text messaging for communication instead of writing e-mails. Six percent of teens use e-mail daily, while 39 percent say they never use e-mail. In contrast, 63 percent of teens text everyday, with some teens texting up to 100 messages a day.

The report runs down some other interesting numbers on online teens including:

• Thirty-nine percent of parents "friend" their teens on social-media sites.

• Sixty-two percent of teens use privacy settings on social-media sites.

• Black teens are three times as likely to be Twitter users than whites or Latinos.

• Teens are less likely than adults age 18 to 64 to have a cell phone, and only 23 percent have a smartphone.

• The most common device for Internet access is on a desktop or laptop, followed by a cell phone. At the bottom of the list are tablets.

The most startling stat of all? Teens are still on MySpace -- 24 percent of them to be exact.

To check out more stats, check out a slideshow on the report here.

-This article first appeared on CNET.com and was published by Donna Tam, a staff writer for CNET News and a native of San Francisco. You can read the original story here: