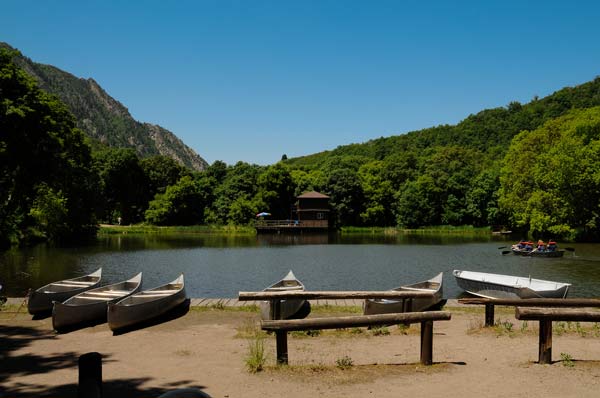 Most people think of summer camps as a warm weather break from the activities that typically happen at home. This often means a few weeks or more without technological devices. Asking a youngster to scrap his cell phone and video games for an entire month is easier said than done!

Fun Without The Screen

If you were to ask a random assortment of parents and their kids about the meaning of summer camp, chances are that most answers would be similar. Respondents would say that summer camp presents the opportunity for young people to develop new friendships, learn new skills and enjoy the warm weather. Few people would even think of responding with an answer that involves video games, cell phones, movies, television and other electronics.

The majority of summer camps don't allow participants to bring their high tech devices along. The summer camp experience is meant to enrich kids and empower them to round out their edges. If kids were permitted to bring along their mobile gaming devices, cell phones, tablets and other electronics, then the environment wouldn't be all that much different from their home.

When kids scrap their electronic devices for weeks or months of interaction with other people their own age, beautiful things can happen. Relationships can form, activities can be enjoyed (that don't involve screens) and memories that can last a lifetime can be made. Tech-less summer camps allow kids to develop meaningful bonds with other people, face to face, instead of through a computer or telephone screen. Yet none of this is possible if your youngster can't put down his high tech devices and separate himself from them for hours at a time. There are actually summer detox camps out there for children who have become far too addicted to technology.

Meeting In The Middle

Yet not all camps have completely banned electronics. Some camps have film making classes that heavily involve computers and electronic equipment. Others still permit kids to bring cell phones as well as other mobile computing devices. Yet this can be quite dangerous for a number of reasons.

For one, parents who allow their kids to bring electronic devices to camp run the risk of their child spending an inordinate amount of time with his tiny little screen instead of partaking in all the fun activities and socialization experiences that summer camps offer. You never know if camp counselors will force your child to participate in experiences or if they will be more laissez faire and let him stick to himself in his room with his phone or tablet.

This kind of tech use can also open doors for kids to encounter increased digital dangers, as there are far more kids than camp counselors around. Families who send kids to camps which permit tech use should heavily consider using parental monitoring device uKnowKids to ensure that they are aware of their children's digital actions, as counselors are unlikely to be monitoring their digital activities. There's also the danger of these tech items being stolen. Most kids at summer camp share living space with others, so it is a bit challenging to secure electronic devices.

Some Form of Tech Is Always Available

So, how is your child supposed to reach home if he doesn't bring his cell phone or laptop? Easy. Although it might feel strange for your child to be without his phone or his mobile computing device, he'll have every opportunity to communicate with you while away at camp. There are land line phones available at all camps so that kids can speak to their families or reach emergency personnel in case of a problem.

Some camps even feature communal computer labs that can be used by all camp attendees in order to send e-mails, browse the web or use a word processor to type up a letter to send home. Even though tech is available at most camps, kids are encouraged to spend the duration of their camp experience away from such devices. Kids can always pick up a pen and paper to write a letter home if they feel the need to touch base with mom and dad.

Should summer camps allow kids to bring any tech items along with them? The answer is complicated. Perhaps the best possible solution is the one that some summer camps have adopted. They've decided to let the kids take a look at their cell phones and e-mails at scheduled times during the day. This way they can feel securely connected to home without missing out on fun outdoor group activities.

Still, there is something to be said for allowing a youngster to break free from his technological chains and the supervision of his parents. Part of the magic that takes at summer camp involves self-development.  If a child learns to solve problems on his own without a reliance on tech devices or parents, he'll grow and begin the transformation into a responsible young adult. Regardless of what type of camp you send your child to this summer, make sure that you are well informed about their tech policies and have thought through the implications of their particular restrictions (or lack thereof).