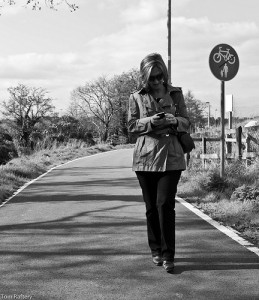 We all know that texting while driving is dangerous – statistics agree that it's even riskier than driving drunk. But even if your child isn't even close to receiving his or her license, you're not off the hook just yet. Texting also presents a potentially fatal distraction while simply crossing the street.

Even if the results of distracted walking aren't fatal, there are plenty of reasons your child should put away their cell phone before they start across the crosswalk. Walking into parked cars. Tripping over the curb. Sprained ankles. Bruises. Emergency rooms report seeing an increase in minor injuries sustained when people were walking while talking on or using their mobile phones.

You've probably told your child since preschool to look both ways and listen carefully for traffic when crossing the street, but if they have a cell phone in their hand it might just not happen. Whether it's as serious as being hit by a car or just an embarrassing one-on-one collision with a parking meter, cell phones simply do not make for observant pedestrians, especially when those pedestrians are younger teens and children.

Parents need to be aware that behind the wheel isn't the only place where using your cell phone can be dangerous. It can be hazardous just to cross the street when you're a multi-tasking tween or teen with iPod earbuds in your ears and your eyes on your phone.