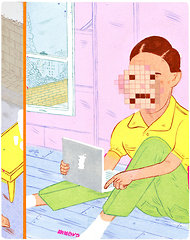 An interesting article reported by the New York Times: Kids Safety, Facebook Depression and How Depressives Surf the Web. By SRIRAM CHELLAPPAN and RAGHAVENDRA KOTIKALAPUDI

IN what way do you spend your time online? Do you check your e-mail compulsively? Watch lots of videos? Switch frequently among multiple Internet applications — from games to file downloads to chat rooms?

We believe that your pattern of Internet use says something about you. Specifically, our research suggests it can offer clues to your mental well-being.

In a study to be published in a forthcoming issue of IEEE Technology and Society Magazine, we and our colleagues found that students who showed signs of depression tended to use the Internet differently from those who showed no symptoms of depression.

In February of last year, we recruited 216 undergraduate volunteers at Missouri University of Science and Technology. First, we had the participants fill out a version of a questionnaire called theCenter for Epidemiologic Studies Depression Scale, which is widely used for measuring depression levels in the general population. The survey revealed that 30 percent of the participants met the criteria for depressive symptoms. (This was in line with national estimates that 10 to 40 percent of college students at some point experience such symptoms.)

Next, we had the university’s information technology department provide us with campus Internet usage data for our participants for February. This didn’t mean snooping on what the students were looking at or whom they were e-mailing; it merely meant monitoringhow they were using the Internet — information about traffic flow that the university customarily collects for troubleshooting network connections and such.

Finally, we conducted a statistical analysis of the depression scores and the Internet usage data.

There were two major findings. First, we identified several features of Internet usage that correlated with depression. In other words, we found a trend: in general, the more a participant’s score on the survey indicated depression, the more his or her Internet usage included these (rather technical-sounding) features — for instance, “p2p packets,” which indicate high levels of sharing files (like movies and music).

Another example: the Internet usage of depressive people tended to exhibit high “flow duration entropy” — which often occurs when there is frequent switching among Internet applications like e-mail, chat rooms and games. This may indicate difficulty concentrating. This finding, too, is consistent with the psychological literature: according to the National Institute of Mental Health, difficulty concentrating is also a sign of depressive symptoms among students.

Earlier studies have looked into the relationship between Internet usage and depression, but ours is thought to be the first to use actual Internet data, collected anonymously and unobtrusively, rather than student-completed surveys about Internet usage, which are less reliable.

What are the practical applications of this research? We hope to use our findings to develop a software application that could be installed on home computers and mobile devices. It would monitor your Internet usage and alert you when your usage patterns might signal symptoms of depression. This would not replace the function of mental health professionals, but it could be a cost-effective way to prompt people to seek medical help early. It might also be a tool for parents to monitor the mood-related Internet usage patterns of their children.

Such software could also be used at universities, perhaps installed on campus networks to notify counselors of students whose Internet usage patterns are indicative of depressive behavior. (This proposal, of course, raises privacy concerns that would have to be addressed.)

Mental health groups have recommended screening in multiple settings as a critical component of preventing mental health problems in young people. We believe that monitoring Internet usage could be part of the solution.