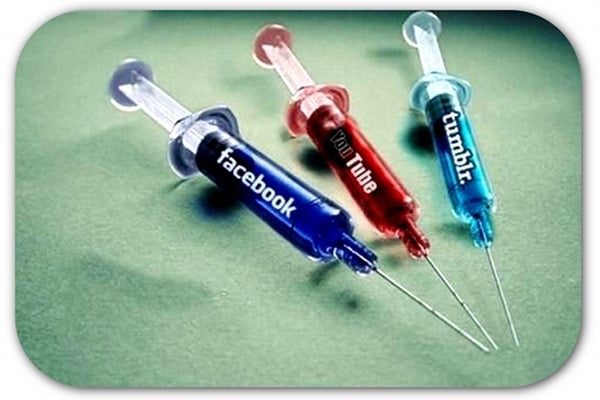 Having your kids “constantly connected” is not a new thing. When I was a teenager we had the same addiction to music as modern teens have with social media. My parents used to refer this unconscious state as “plugged in”, which described me as; headphones in and music up so loud that I couldn’t hear the outside world. At the time I loved music so much that I would listen to it all the time, as loud as could, frequently blaring it from my second floor speaker system so loud the entire neighborhood could hear it. I’m fairly certain my thought process at that time was as follows: This music is really good (which it wasn't), but this music is really really good turned up all the way, and because if Ilike it so much, everyone else should hear it too, right? [Cranks volume knob all the way to the right]

I’ve taken you on this leap into my past because it seems as though the same short-sighted, self-righteous state of mind still applies to teens today. His or her publication of meaningless Status Updates and uninformative Tweets are enough to drive any educated person up the wall. Taking it a step further, teen’s have begun a migration to Instagram, where they seem to think applying one of twelve preset filters to pictures of absolutely nothing makes them the next Ansel Adams. Should parents care? Not particularly if they know their child is keeping things appropriate and not destroying their chances to get into college in a few years. (Insider tip for parents: you don't have to know EVERYTHING your teen is doing online, but social monitoring or using parental intelligence is always a good safety net.) But for some teens, this “constantly-connected” lifestyle is being taken to extremes, and I’m here to tell you about 6 key indicators that could point to your teen’s phone or social media addiction.

1. Your Child Has To Respond To Everything... Immediately.

If unanswered texts or Tweets get your teen spinning into a tizzy, there's a good chance that their smartphone is adding stress to their life rather than making it easier.  It might be that his phone and his social media comes before everything else and is constantly interrupting his day -- whether it's writing a history paper or spending some quality time with the family. When your teen starts getting anxious about their inbox, Facebook wall, or Twitter feed, make him take a moment to step back, and remind him that it's probably not as urgent as it seems. Often times, requiring your teen to sleep with his phone away from his bed or keeping it in his backpack instead of a pocket during class can gradually help to lessen his urge to be constantly checking for updates.

2. You Catch Your Teen Having Phantom Cellphone Syndrome

At times, you see your teen check his phone as if they have a new message, only to scrunch his face with a puzzled look as no new messages have appeared on their phone even though “they swear they felt it vibrate” Phantom cellphone vibration syndrome is a real sign of technology addiction -- and it's more common than you might think. A study conducted at Indiana University-Purdue University Fort Wayne found that 89 percent of undergraduates had experienced feeling nonexistent cellphone vibrations.

3. They Check In On Foursquare - Everywhere They Go

Is your child the mayor of your house, the nearest convenience store, the local pizza shop, the bowling alley and his high school? Yikes, they might need some time away from Foursquare. As an aside, make sure your child doesn't have a public profile, or his check ins could be seen by everyone, including the people you definitely DON'T want seeing where your child is every minute of the day.

Is your child’s excuse for having his phone on them at all times always that he “Doesn't want to miss out on anything”? Well, there's an acronym for that: FOMO. It's become common for teens who use social media and smartphones to experience a "fear of missing out". When they're unable to get to their phones or when they're getting updates about all the exciting things that everyone in their social network is doing and feeling depressed about it, it’s time for a technology timeout.

5. Your Teen Has A Name For His Or Her Phone.

If that mobile device has a name like a pet, your teen may want to keep it secret.  The latest reports explain: 29 percent of cell owners describe their cell phone as “something they can’t imagine living without.” Catch your teen referring to their phone by persona or name? Maybe it’s time for a surgical-separation.

If your teen is having an increasingly difficult time focusing in his classes and eagerly awaiting the ringing of the bell so that they can check his phone and return that unanswered text, an Internet or smartphone addiction could be partially to blame for low grades. The uKnowKids dashboard offers an industry unique feature allowing parents to see when their teen is most active on their social media and smartphones. Seeing a direct correlation between digital activities and dropping grades has never been easier for parents.