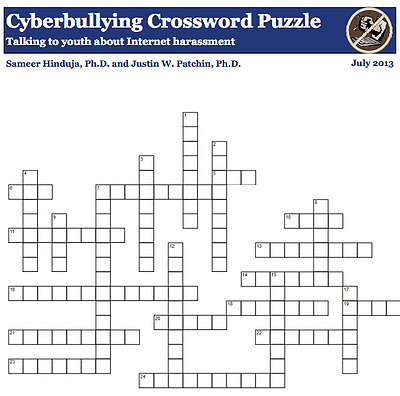 A crossword puzzle to be distributed to youth to promote discussion about cyberbullying.

A look at the clues, download the PDF here:

5. Acronym for the company that provides an Internet connection to individuals or companies.

6. Short for “World Wide Web” or pages linked together via the Internet

7. A wireless handheld device which allows for telephone communications.

10. Interactive web journal or diary, the contents of which are posted online and then viewable by some or all individuals.

11. An electronic device that stores and processes information and also facilitates electronic communication when connected to a network.

13. The denial of access to particular parts of the Internet.

16. A form of bullying where physical assaults are recorded on mobile phones or digital cameras and distributed to others.

19. Physical or emotional injury to someone.

22. A user-created web page on a social networking web site.

23. Sending angry, rude, or obscene messages directed at a person or persons privately or an online group.

24. Unsolicited words or actions intended to annoy, alarm, or abuse another individual.

2. The act of requesting another person to enter your social network

3. Repeated and deliberate harassment directed by one in a position of power toward one or more.

4. Two or more computers connected so that they can communicate with each other.

7. Intentional and repeated harm inflicted through the use of computers, cell phones, and other electronic devices.

8. A file on a computer that records user information when visiting a web site.

9. Unsolicited electronic mail sent from someone you do not know.

12. An intermediary web site which hides or disguises the IP address associated with the Internet user.

15. A worldwide network of computers communicating with each other via phone lines, satellite links, wireless networks, and cable systems.

17. Making a statement or taking an action that indicates harm to another.