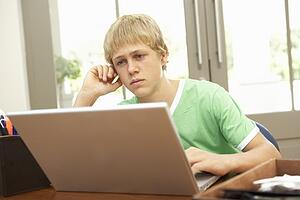 Check out this very interesting study done by the University of New Hampshire on the dangerousness of online predators. What are your thoughts?

“These are all serious crimes,” said lead author Janis Wolak, a senior researcher at the UNH Crimes against Children Research Center. “But the so-called ‘online predators’ are not more insidious.”

The research results are presented in the Journal of Adolescent Health in the article “Are Crimes by Online Predators Different From Crimes by Sex Offenders Who Know Youth In-Person?” authored by Wolak and David Finkelhor, professor and director of the UNH Crimes against Children Research Center.

The study compared 143 cases where sex offenders met underage victims online with 139 cases where offenders knew victims in offline capacities, such as through their schools, families, churches or neighborhoods. All of the offenders used the Internet or cell phones to communicate with victims. The incidents came from a national sample of law enforcement cases in which offenders were arrested for Internet-related sex crimes. Details about the cases were provided by police investigators.

The majority of cases in both groups involved illegal sexual activity with underage youth, or statutory rape. Both groups involved a common dynamic: adult men who used online communications to seduce and manipulate teens, mostly girls, into sexual relationships. Many offenders also solicited sexual images from victims. However, force, abduction and even identity deception were rare.

“We should stop emphasizing the dangers of online strangers. We should start teaching children and adolescents to understand and resist sexual advances from adults, whether met online or in-person and whether made through online communications or in-person. That would do more to protect young people,” Wolak said.

The UNH Crimes against Children Research Center (CCRC) works to combat crimes against children by providing high-quality research and statistics to the public, policymakers, law enforcement personnel, and other child welfare practitioners. CCRC is concerned with research about the nature of crimes including child abduction, homicide, rape, assault, and physical and sexual abuse as well as their impact. Visit the center online at http://www.unh.edu/ccrc/index.html.

The University of New Hampshire, founded in 1866, is a world-class public research university with the feel of a New England liberal arts college. A land, sea, and space-grant university, UNH is the state’s flagship public institution, enrolling 12,200 undergraduate and 2,300 graduate students.

Are your kids safe from online predators? Use this infographic to get informed.