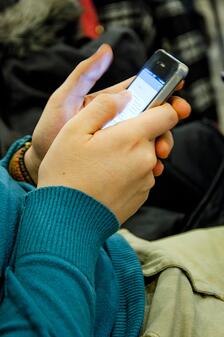 Such an innocuous symbol, right? On it's own, it doesn't mean much. But for parents in the know, what's attached at the end of that hashtag symbol can tell you much about what your child is interested in.

But you're a cool parent. You have an iPhone. You use Twitter and Instagram. You even follow your kid's accounts. You've got a handle on this tech stuff. So what do hashtags say about your kids?

Before Miley shocked the media with twerking, it was a popular tag on Instagram and Vine (#twerk), which is why most kids rolled their eyes when parents and critics voiced their disapproval with this "new" dance. Had you been attentive to hashtag activity leading up to this performance, you really wouldn't have been shocked. It's been around for some time, and kids have been imitating the dance, likewise.

There's also a hashtag that encourages risky behavior among our youth. Search the tag #doitforthevine (on the Vine app) and you can find clips of kids encouraging each other to risk their safety, break the law, and even hurt each other for six seconds of fame. Smacking people for laughs, homemade stunts gone awry, and even smoking in class are just some of the clips that are popular under this hashtag.

Of course, it's not expected that you become a private investigator and constantly monitor your child's social media accounts. Rather, boost your parental intelligence and keep tabs on the popular page and the hashtags in those posts. Chalk this one up to necessary research so that you can have conversations regarding your expectations when these topics are in the spotlight.