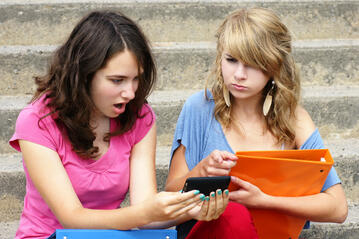 Kids around the world are touched by cyberbullying every single day. Whether they are the victims, the witnesses, or the bullies themselves, children are constantly coming face to face with this epidemic. As school districts, lawmakers, and parents continue to search for ways to combat this increasingly dangerous issues, mobile developers have also decided to join the fight against cyberbullying.

According to Gamesbeat, the game developer, Pixelberry Studios, has added an episode to its High School Story game that centers around cyberbullying. Oliver Miao, the Chief Executive Officer of Pixelberry, explained that the studio created “Hope's Story,” to supply guidance to teens on the issue of cyberbullying, and to introduce them to tools, such as Cybersmile, which is a resource that helps victims of bullying.

Players of the game our confronted with “Hope's Story” when a character asks the player if they've noticed the girls newly withdrawn nature. As the episode unfolds, it is revealed that through a misunderstanding, Hope has become the center of constant cyberbullying from teens at the school. While the quest in itself introduces players to ways of properly handling the situation, the link to Cybersmile has proven to be a huge success.

Maio explains that through the game hundreds of teens have contacted Cybersmile seeking help, “these are teens that have reached out because they are being bullied themselves or they are hurting or they are thinking about suicide.”

Gaming is a culture and language that children around the world gravitate towards, and using it as an educational platform against cyberbullying appears to be a step in the right direction. A game like High School Story allows teens to learn and express themselves in a safe environment while also providing them with easy access to an organization that may end up saving a bullied teens life.

Pixelberry's attempt to reach teens through gaming has proven to be a triumph in the fight against cyberbullying. Hopefully, their journey will encourage other game developers to connect with and help bullied children.