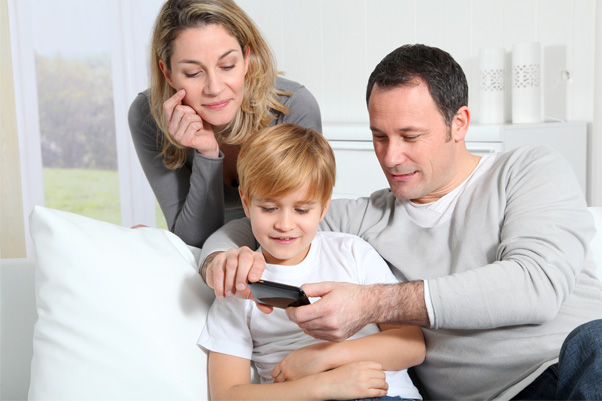 Texting can be regarded positively or negatively in a household. Learn how to see the silver lining of texting and end up using it as a tool for digital parenting. This article was originally published on The Huffington Post by John Duffy.

My son George, my one and only child, is now an 18-year-old man. In a few short months, we will be dropping him off at college. He's busy focusing on his senior year in high school. That moment hugging his Mom and I goodbye on some quad a few months from now isn't remotely on his radar. For him, it's just some hazy, remote construct of a distant future.

But my wife Julie and I sense that hourglass emptying, that moment approaching in double time. We take turns being upbeat and distraught, our scripts ranging from how exciting this next chapter will be for him and how ready he is, to how quiet and dead this house will feel come September. We are both working overtime to be available to every moment with him, every swim meet, awards ceremony, late night talk, even silent breakfast. We drink him in, knowing soon, this iteration of our lives together ends.

Now, today is Saturday, and after sleeping in, I thought George and I might grab a sandwich, a frequent weekend tradition for us.

But today, he had plans with his buddies. He jumped in the shower, grabbed car keys and bounced. Of course, that's how it should be: a guy should spend Saturday having a good time with his buddies, not hanging around with Dad. That would have been my last choice at 18 too. Still, as he pulled away, I swear I could hear the opening notes of "Cat's in the Cradle" swelling gently in the background. Lump in my throat, I made alternate plans. I began to work, distractedly, in silence.

An hour later, my cell buzzed. We psychologists don't typically like when our phones alert us. Rarely do people reach out to their therapist with good news.

I was relieved to see it was a quick little text from George, a joke from one of his friends he wanted me to hear.

A while after that, he texted a single line update on his plans for the day. An hour later, I sent him a link to a story highlighting an ongoing inside joke. He sent back a "Haha!"

From the outside, this may all seem like benign chatter, distraction, a waste of time. This is where we are so very mistaken.

I do a lot of work with teenagers and their parents. Many of my parent clients lament the texting culture. Their kids don't talk to them anymore. They're always looking at that damn phone. They're butchering the language. They use texting to avoid me.

To my thinking, these parents are all missing the bigger picture. Texting with your kids can be a very, very good thing if you allow it to be. It is an excellent way to make a connection, touch base for a moment, make a mark or a point, briefly, without helicopter-ing. It provides a really great boundary between older kids and parents, allowing a wider berth of freedom, trust and connection than most any other techie advance to date.

Of course, some parents feel texting is far too impersonal, lacking the tonal nuance and subtle cues of the voice, or the face. But remember for a moment how you felt about your parents, the tonal nuances, the subtle cues. Perhaps they drove you crazy, even drove you away. I suspect that texting, used sparingly, makes us less annoying.

And if we open ourselves up to the (certain and inevitable) possibilities, texting (and whatever replaces it in the future) will change the way we communicate with our kids for a lifetime. And consider this: I find that kids communicate more with their parents as a direct result of texting. Even the surliest of teens is likely to share more of her life with her parents than she would otherwise, way more.

My experience just today suggests that the text can be a most comforting, joyful touchstone.

Further, texting circumvents the bounds of geography and convenience. For those of us with older, mobile kids, that's a big comfort and relief. I think our parents would have loved such access to us a generation back.

Now, I know one woman who refuses to text with her adult children and grandchildren. She is offended by the very idea of it, asserting, "If they want to talk to me, they can pick up the phone and call."

That's a quaint notion, I suppose. But her stubbornness more often than not results in a dearth of any communication whatsoever, radio silence. No updates on work or dance recitals. No checking in to see how she's doing. No quick "I love you." She has, in effect, removed herself from the familial grid.

As parents, we have to remember that our children were raised with texting as the norm for communication. It's absurd that we call their smartphones phones at all. Ask anyone younger than 20 when they last made a personal phone call, one that lasted more than a minute or two. It just doesn't happen anymore. I'm still trying to convince this woman to grasp and accept this reality, and to allow texting to enrich, not replace, her other communication with her family.

Because we change with the times. And if we're smart, we benefit from the change. Just now, George just sent me a short video of he and his buddies. And just like that, the future feels a tad brighter, more connected, more hopeful.

Depending on your perspective and willingness to accept this concept, texting can be an advantage for modern parenting. Use uKnowKids' digital parenting tool to become even more connected to your teen's digital world and ensure their online safety!