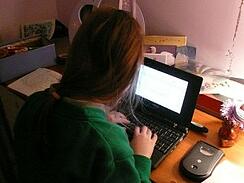 Over the years, I have seen many YouTube videos and unfortunately, the one that is permanently cemented in my mind is “Racist White Teen Girls.”  This video is one of the most disturbing things I have ever seen.  The girls who speak in it are young, impulsive and troubled.

The situation could have been avoided if their parents had a parental intelligence system. These two girls had too much freedom on the Internet and their parents weren’t keeping an eye on them.  I want to be clear that I am not blaming their parents, I am simply saying that the Internet can be a dangerous medium if not used properly.

In the video, two girls, age 14, go on a 14 minute rant saying horribly racist comments (because they are minors their names were not released).  They appear to think it’s acceptable to behave this way.  They were acting so tough behind the camera and didn’t realize how viral their video would become and how it would affect not only their lives but also their parents.  They sadly had to learn the hard way that the Internet is not toy. With the click of a mouse anything can be put on the Internet and be viewed by millions of people around the world.

After posting the first of two videos on YouTube, the teenage girls received a lot of hate mail. Instead of apologizing, the girls decided to make another video responding to the comments that people made.  The second video is the one that made everyone around the nation go berserk and what really got them into trouble. (video posted above)

As a result of their video, the girls were expelled from school, received death threats, and had to have police stand outside their homes because they were in fear for their lives.  One of the teens had to stay at a relative’s house because it’s was too dangerous for her to return home.

Although both girls released an apology I think it’s safe to say it came a little too late. One of the mothers stated that her daughter was in a deep depression after the backlash of the video.  I can only assume that the daughter didn’t understand the ramifications of their actions or didn’t care at the time.

Their lives are forever changed because of something they posted online.  Even though YouTube took the video down, people were still able to copy and post it.  I’m sure these teens didn’t imagine their video making headline news.  Fourteen minutes…that’s all it took for their lives to be ruined.

The reason I decide to share this video is because if I remember it so vividly, you can only imagine how many others do too. I can’t emphasize how important a reputation is…it will stay with you forever, bad or good.  It’s important for parents to have a monitoring system so this life altering situation doesn't happen again.  Whether it’s Facebook, MySpace, Twitter or YouTube, children need to watch what they write and say.  When I tried to find this video, I couldn’t remember exactly where it was located so I just typed in “Florida teen’ racist video.” The information including the video came up immediately.  It was easy as 1,2,3.

You have to ask yourself what you want to come up if someone finds you on Google. Hopefully it will be something positive!