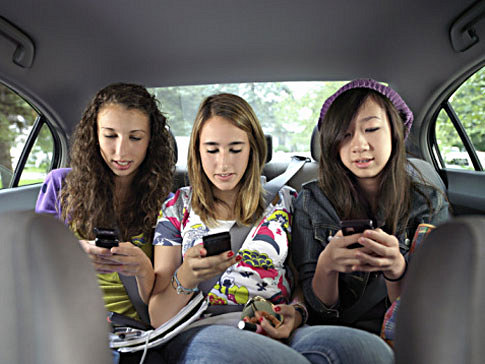 Does your teen have a smart phone? You've probably noticed that it makes a teenager's life a lot different than when we were kids.

No more asking to use the house phone at a friend's house to call home –  just text mom to ask her if it's okay to spend the night. No need to plan a night out – just check in on FourSquare and find out where everybody is. And that cute guy in Spanish class? You can get the inside scoop on him on Facebook without even talking to him.

Life is very different for the 23% of teens ages 12 through 17 who have smartphones of their very own. That's almost 1 in 4, so it's pretty likely that at some point, you as a parent are going to hear, “But Mackenzie has one!” or “Josh's parents let him have one!”

Some parents are a little hesitant to get a smartphone for their child. It is a pricey device, after all, and it also puts a lot of power in the hands of a teenager and adds extra parental monitoring responsibilities for the adult.

There are some great models of kid-friendly phones out there that allow only limited access, but as they reach the tweenage years kids definitely do not want these. Even regular cell phones don't really pique their interest. They don't just want to talk on the phone – they want to text, shop, surf the Internet, listen to music, watch videos, take pictures, check emails, and log in to their favorite social network 24/7.

Actually, a smartphone is less of a phone than it is a tiny computer that fits in the palm of your hand.

And because a smartphone has so many capabilities, it's important that your teen receive one only when they're ready. That may be when they're 11 or 17 or not at all; only you can decide what your child is ready for.

On the upside; the smarter the phone is, the smarter a parent can be. Smart phones, particularly android and blackberry mobile phones, have the ability to be monitored in a variety of different ways. For instance - a parent with a uKnowKids subscription can monitor their childs text messages, call history and even their location via GPS.