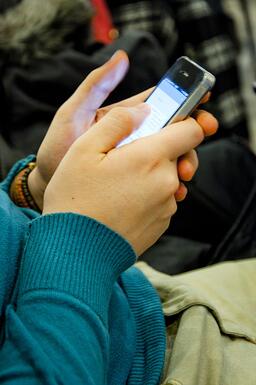 Earlier this month, a 15-year old from St. Petersburg, FL was arrested for sending “hundreds of threatening text messages” over the course of eight days to former friends. Some were even death threats. The suspect used a smartphone app called Kik Messenger, which happens to be the cyberbullying app du jour, also used in the Rebecca Ann Sedwick cyberbullying case that contributed to her suicide. Kik allows users to send text messages from an Internet Desk Top to cell phones.

The tactic is called “text bombing”

Huffington Post writer Ann Brenoff deftly addresses this tactic in her article, “What Every Parent Needs to Know About Text Bombs.” Her article did a great job identifying some of the apps used to do the cyberbully’s “dirty work,” but before we get into that, let’s drill down a little deeper into the motivation behind text bombing.

With text bombing, there are two ways to inflict harm.

The first way, like most cyberbullying tactics, is rooted in emotional conflict. The ex-friend, the ex-beau, the jealous peer, etc. lashes out in anger, and in extreme moment, repeatedly texts the most hurtful thing anyone can think of, e.g., you don’t matter. Go kill yourself. I will find you and destroy you.

For example, in the St. Petersburg case, the teen suspect learned that one of her target’s relatives had recently committed suicide, so she began bombarding her ex-friend with messages to do the same.

The second way to text bomb relies on apps to do the dirty work by sending a message hundreds of times as a way to harass the target, break their phone or even cost them money. Popular text bombing apps mentioned in Brenoff’s article included SMSBOMBER (Android) and SMSBARRAGE before the Google App store got wise to it and banned them.  However, these text-bombing apps can be found anywhere. A simple Google search finds more SMS bombing apps like those from Cydia that anyone can learn to use in minutes.

With my cyberbullying columns, I’m always trying to identify the latest tactic and provide educators and parents with technological and behavior tips to prevent it.

First the tech tips: The way to block multiple duplicated messages from any sender is through Anti-SMS Text Bomb (Android). The link to this page also includes several other anti-sms bombing apps for other phones.

And according to NY Daily News, there’s a new app being developed, called STOPit, which students download to their phones. It enables students to easily capture malicious behavior with their Apple or Droid smart phone and send it to adult contacts or officials with the touch of a button — and in some cases anonymously.

As usual, the public reaction to this text bomb tactic is shrill, bordering on exasperation. Said one HuffPo commenter: “Here's an idea.....don't give a cell phone to a kid [who] doesn't think that each and every keystroke equals $$$$$$. If they are STILL too young to understand the value of a $ then they are too young for a cell phone.”

According to the latest Pew Internet and American Life study on Teens and Technology (March 2013) 78% of teens (12-17) now have a cell phone, and almost half (47%) of those own smartphones. An earlier study in 2010,  found that most teenagers with cell phones have family plans paid by their parents.

When you give a child or teenager a cell phone or computer of any type, you are giving them limitless power to do good or to do harm. And likely, you are footing the bill, so you already have leverage for encouraging their ethical behavior around texting.

An ongoing conversation needs to accompany the privilege of owning a smartphone. Do you discuss with your child:

The tools, the tactics and the technology are all going to change. Six months down the road; we are likely going to have a whole new set of apps and digital devices connected with cyberbullying. But the conversation between kids and their parents (and schools) should be about the expected and appropriate behavior when handed a technological device. Are you having that conversation already?