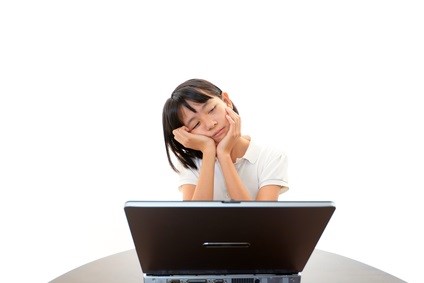 What is the appropriate course of action for schools and cyberbullying? There may not be a right answer, but here is one administrators opinion. This article was originally posted on BlogHer.

If your child is getting cyberbullied, what can you do to help? Would you call on your child’s school to unravel the complicated drama that inevitably ensues with a bullying incident? Is school the best authority over these matters?

Bullying has become a wholly different thing than it was perhaps when you were bullied in your youth. Back in the day (meaning the pre-cell phone, pre-social media era) if your group of on-again-off-again friends decided you were off-again, they got together at lunch time and sat at a different table where there was no room for you. Or they told your boy-crush that you were crushing hard on him even though you swore them to secrecy. You suffered the day in school and maybe, if it happened to be on a Friday, your so-called friends had a sleepover without you and called you up to let you know that they were all at the ring leader’s house ... and you weren’t. Your angst, anger and hurt was extended all the way through a pint of ice cream, but not much past the weekend, as your friends remembered that your group science project was at your house and it was due on Monday. So they got over their funk, and you got over your hurt. Everyone remembered why you became friends in the first place as you finished your project together. And all was well again. (Did I just tell way too much about my middle school self? Well, perhaps, but you get the point ... )

This pain and misery lasted a day, maybe two. Nowadays, with the help of technology, bullying has taken on a whole new character that is meaner, wider spread and longer lasting. Kids are hijacking the social media of others and saying harmful things in their stead. They are posting derogatory and hurtful comments on Facebook and Formspring. They are spreading unauthorized photos and video far and wide on cell phones and the Internet.

And with an impact that is so much more profound, before parents can even help their children deal with the pain, alienation and the utter blow to their self-esteem, they just want to know how to make it stop. We parents want to end the suffering before a tragic outcome ensues like it did for Megan Meier, Phoebe Prince and Alexis Pilkington, three cyberbullied girls who committed suicide. Often the first place parents turn is to their child’s school. Even when a cyber bullying incident starts outside of school, it usually shows up on campus in some form. Either the parties involved are in school together or the incident (or series of incidents) has spread virally by Internet and cell phone to other students. So parents contact their principal to “handle it.” It seems the logical choice -- school is where your child spends most of his or her day, often the school has authority over the parties involved, and a school’s discipline will likely be quicker and less intrusive than the police. So many parents ask for and expect the school’s help.

The increased incidence of cyberbullying is creating a quandary for school administrators, because policies and laws are murky with regard to investigating and disciplining the bully. Really, since this form of bullying is so new, everything about cyberbullying is murky and subject to interpretation. Jan Hoffman at the New York Times takes on the subject of cyberbullying and schools with impressive depth in her article, Online Bullies Pull Schools into the Fray.  According to the article, school administrators across the country are inundated with incidents of student conflict and unrest as a result of text messaging and social media. When a situation turns ugly, since neither school policy nor the law is clear about what a school administrator should do; the choices are difficult and heart-wrenching. If an administrator decides to take a hands-off approach, she risks allowing an incident to spiral out of control when she may have been able to stop or remedy it. Or if the police get involved, both the victim and the perpetrator may be subjected to a long, protracted investigation and trial.

On the other hand, if a principal or assistant principal decides to do her own investigation and discipline, she risks lawsuits, like the one that cost a California school district over $100,000.00 for suspending a child who posted a hurtful video attack on YouTube. They risk falling into the deep, dark hole of investing time and resources to investigate, judge and punish activity that is so fraught with complicated and competing legal and ethical issues, like a student’s right to free speech and privacy and a school’s right to search and seizure and to protect its students.

Hoffman’s article shows clearly that as school districts and the courts sort out how and when schools should step in, and the pressure to deal with incidence of bullying on and offline escalates, administrators are using a combination of old school prevention (like counseling, student awareness and dialog), and new world creativity like administrators keeping their own “Fakebook” accounts on Facebook so that they can see what students are doing online without them knowing. Some schools have also initiated peer counseling and anonymous help and tip lines, to try to prevent and stem the damage from these technological assaults.

Kelly Wickham, known as MochaMomma among us bloggers, is also known as "Ms. Wickham" by the students at the high school where she is assistant principal. She says this whole cyberbullying phenomenon has her flummoxed, because it is rampant and complicated. Once you step in to help, you get sucked into a vortex of time and man-power intensive activity that is extremely costly (“vortex” is my word!). She says:

She says the administrators in her school have to perform a tricky balancing act when it comes to deciding if and when to get involved. But for her, the bottom line has to be whether or not the infraction has disrupted the school’s education process.

"The classroom is holy land,” Kelly says, “I think of it as a sacred space. If someone is behaving in a disruptive way in the classroom or in a way that interferes with learning, I will always step in.”

To a parent who is dealing with a devastated child from a cyberbully attack, not only has the child’s education been disrupted, but his or her entire life. The New York Times article talks about a distraught father whose son has withdrawn from most everything because the bullying he has endured, thanks to the power of the Internet, quickly spread to other schools. So now as he is playing his sport, he gets to hear the opposing team chant the derogatory nickname his bullies assigned to him. He has withdrawn from sports, too. Would Kelly decide to deal with this kid’s bullying problem? And even if she did, what can she do? She said that one of the most frustrating aspects of dealing with worried parents is that the school can only do so much. Parents come looking for relief and expect the school to have all of the solutions. Some things, like the behavior of students of another school, are just beyond the school’s reach. But if the school is not the answer (or not the entire answer), what’s a parent to do?

What to Do to Combat Cyber Bullying

Dr. Sameer Hinduja, co-founder of the Cyberbullying Research Center, suggests that parents can most help by (based on his radio interview with Linda O’Connor on Buffalo New York’s WNY Media Parent Talk):

1. Encouraging your children to step up and speak to an adult when he or she experiences or witnesses bullying. However, recognize that this is extremely difficult for children and teens to do. There are lots of forces against disclosure by students -- fear that they will lose their access to social media or their cell phone, the common “no snitch” mentality among youth, and fear of retaliation. So students have to be assured of anonymity and safety in order for them to speak up.

2. Fostering open and candid dialog with your children from the beginning of their Internet and cell phone use. If communication channels remain open, the chances are greater that your child will speak up or at least that you will detect a problem when it arises. Dr. Hinduja recommends that parents speak to their children at least once a week about what they are doing online.

3. Looking for clues of a problem. Research shows that cyberbullying results in profound emotional changes in the victim. If your child’s demeanor changes and he or she is showing signs of emotional distress -— sadness, fear or anxiety -— start to investigate by talking with your child.

4. Being a voice for youth in your community -— call your school district and ask about their cyberbullying policy and what is being done to establish policy. Push for education and informational opportunities for students, parents and the community.

6. Being part of the solution for others. Be an available and supportive adult to your child’s friends. By doing this, you become a powerful community resource.

7. Being deliberate about your discussion of online and off-line safety. Your kids may roll their eyes through the entire talk, but they need to know important safety measures. This discussion is as vital as the “stranger-danger” talk.

1. If the bullying is significant enough to have a negative effect on your child, do not just ignore it. The earlier bullying is addressed, the better.

2. Encourage your child to talk to you. Try to get to the truth. This is no small feat. Kids do not want to disclose their role in the matter. But encourage them to tell you the entire story.

3. Listen to your child's prospective and validate his or her voice. Assure your child that you want to take actions that will make life better for him or her and not worse. Keep your child in the loop.

4. If the bullying occurred at school, contact the principal and solicit the school's help. Just have realistic expectations of what school administrators can do.

5. If the bullying involves threats of violence or danger, call the police.

Soon we will no longer make a distinction between bullying and cyberbullying. At the middle and high school levels, most ongoing bullying has a digital component -— either cell phone texting or online social media. As Dr. Hinduja points out, the Internet is no longer a part of teenagers’ lives, it is their lives. So the more we parents know about what are kids are doing online, the more empowered we are to help. Most schools can and will offer assistance. But they can’t solve the problem alone.